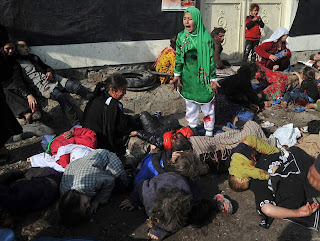 Tarana Akbari, 12, screams in fear moments after a suicide bomber detonated a bomb in a crowd at the Abul Fazel Shrine in Kabul on December 06, 2011. 'When I could stand up, I saw that everybody was around me on the ground, really bloody. I was really, really scared,' said the Tarana, whose name means 'melody' in English.

Out of 17 women and children from her family who went to a riverside shrine in Kabul that day to mark the Shiite holy day of Ashura, seven died including her seven-year-old brother Shoaib. More than 70 people lost their lives in all, and at least nine other members of Tarana's family were wounded.

The blasts has prompted fears that Afghanistan could see the sort of sectarian violence that has pitched Shiite against Sunni Muslims in Iraq and Pakistan. The attack was the deadliest strike on the capital in three years. President Hamid Karzai said this was the first time insurgents had struck on such an important religious day. The Taliban condemned the attack, which some official viewed as sectarian. On the same day, a second bomber attacked in the northern city of Mazar-i-Sharif. Karzai said on December 11 that a total of 80 people were killed in both attacks. (December 7, 2011)