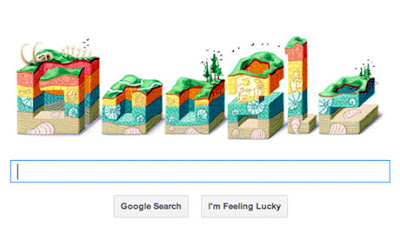 Nicolas Steno, the Danish anatomist widely regarded as the father of geology, has been commemorated in a Google doodle marking his 374th birth anniversary on 11 January.

The doodle illustrated the search engine's six letters in a geological style, with fossils in various bottom layers, with a green surface on top.

Steno's work on the formation of rock layers and the fossils they contain was pivotal to the development of modern geology while his catholic piety has also been evaluated in recent decades with a view to his possible canonisation.

Born as Niels Stensen, he left his native of Copenhagen in 1660 to study medicine in the Netherlands, eventually finding his way to Italy where he became part of a body of researchers following in the footsteps of Galileo's mathematical approach to science.

His work on the teeth of a shark that was caught by fishermen near the town of Livorno led him to the question of how solid objects could come to be found in other solid objects, such as rocks or layers of rock.

In what is now referred to as Steno's law of superposition, he reasoned that layers of rock are arranged in a time sequence, with the oldest on the bottom and the youngest on the top, unless later processes disturb this arrangement.

Originally a Lutheran, he converted to Catholicism and was beatified in 1987 by Pope John Paul II, completing the first step towards being declared a saint.