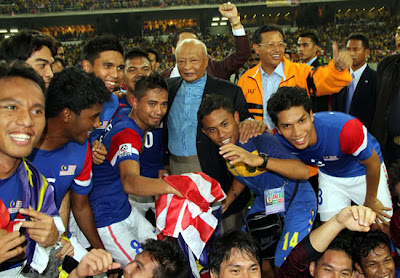 The fiercely competitive and hugely unpredictable AFF Suzuki Cup reaches its climax in Jakarta on Wednesday with the young Tigers of Malaysia looking to protect a three-goal advantage over shell-shocked Indonesia in what is sure to be a pressure-cooker atmosphere in the Gelora Bung Karno Stadium. Malaysia pulled off a surprise 3-0 victory over favourites Indonesia in the first leg of the final before 80,000 fans at Kuala Lumpur's Bukit Jalil Stadium on Sunday. The youthful Malaysian side, full of confidence after beating defending champions Vietnam 2-0 on aggregate in the semi-finals and sensing a first ever AFF Suzuki Cup crown, ran riot during a spellbinding 12-minute period in the second half to take control of the two-legged final.

Goal-machine Safee Sali scored twice with substitute Ashari Samsudin also getting his name on the scoresheet much to the delight of the partisan home crowd. While Safee soared to the top of the scoring charts with four goals, strike partner Norshahrul Idlan put himself firmly in the frame for MVP honours with his alertness and close control setting up Malaysia's first and second goal. He took full advantage of a loss of focus and shape in the previously foot-perfect Indonesian defence to twice wriggle clear of his markers on the byline and tee up Safee and then Ashari for their goals.

The stirring second half performance from Malaysia spoke volumes for the tactical nous of their coach K. Rajagobal who sent on attacking midfielder Ashari after the break. He urged his young charges to be more adventurous going forward, an approach that paid handsome dividends. It will be tempting for Malaysia to park a yellow and black bus in front of their goal and soak up what is sure to be wave after wave of Indonesian pressure in the second leg.

That tactic worked against Vietnam in the cauldron-like My Dinh Stadium when Malaysia successfully safeguarded a 2-0 lead and with the glittering prize within their grasp Rajagobal may go for the pragmatic over the daring. He knows that all it will take to seal the deal is for the in-form Safee to put the final touch to a quick breakaway. Indonesia coach Alfred Riedl has plenty to occupy his mind before the second leg after his team hit the self-destruct button when play resumed after a six-minute delay to allow organisers to deal with the issue of lasers being pointed in the eyes of some Indonesian players. He will have to decide whether or not to stick with striker Cristian Gonzales, who had a quiet game after his goal-scoring heroics in the semi-final, or call in the cavalry and hand the iconic Bambang Pamungkas his first start of the tournament. Irfan Bachdim, the new poster boy of Indonesia football, may also be in line for a recall in place of Yongki Aribowo, who starred in the second-leg of the semi-final against the Philippines but failed to reach similar heights on Sunday.