I heard from Aljazeera today. 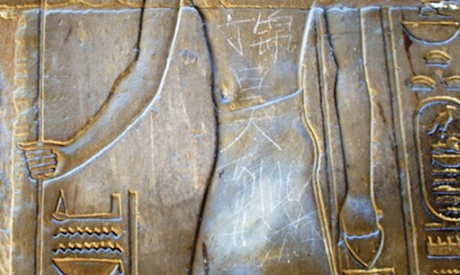 and google the here:

Recently a Chinese tourist found some Chinese words engraved in the Luxor Temple in Egypt saying that “Ding Jingyu paid a visit here(丁锦昊到此一游)” indicating that the words may be left by a previous Chinese tourist.
Being exposed on internet
Yesterday morning, someone published a ​​micro blogging post saying that the scribble was probably made by a student from Nanjing, Jiangsu Province. Meanwhile, the post also indicated the birth year, month, the school name and other personal information of the child. Many netizens said that if it is indeed done by a student, his parents shall apologize.
The parents: “We are sorry”
Yesterday afternoon, a middle-aged man called the XKB 24-hour news hotline 96060, claimed that his child is the one engraved the Egyptian temple and he and his wife agreed to meet the reporter face by face. During the interview, the mother shed tears and they didn’t want to mention too much about the event but insisted that it was done when the child was small.
“We had traveled with him since he was a kid, he saw a lot of similar situations (engravings in the buildings), but we did not teach him that it’s wrong; the child’s ability to imitate was strong, when he traveled to Egypt with families, he was probably not well supervised.” the child’s mother was almost crying. “We should apologize to everyone, but I ask to forgive the child by offering a chance.” she said.
Source: 中国江苏网, xkb.com.cn