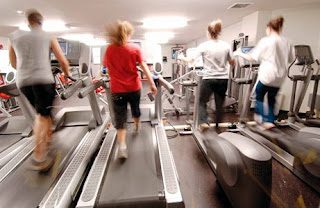 
Wow...what a finding:.
Now that was some workout: Women report having orgasms from exercise
LOS ANGELES, March 23 — Need a little more motivation to hit the gym? A new study published this week confirms what many have already known, that up to 15 per cent of women can experience orgasms, dubbed “coregasms,” from physical activity.

Published in the journal “Sexual and Relationship Therapy,” researchers from Indiana University in the US surveyed 370 women who’d experienced sexual pleasure or climaxed during exercise, many of whom had the experience 10 or more times. Most of the women reported that they weren’t having sexual daydreams and that they couldn’t control the onset.

Of the findings, researcher Debby Herbenick said that “they suggest that orgasm is not necessarily a sexual event, and they may also teach us more about the bodily processes underlying women’s experiences of orgasm.”

What workouts produced the most fireworks? Abdominal exercises were especially potent. The top pleasure generator in this category was a contraption known as the “captain’s chair,” where the user supports her arms and back against a frame, and she repeatedly raises her legs into a sitting position.

“Magazines and blogs have long highlighted cases of what they sometimes call ‘coregasms,’” Herbenick added. “But aside from early reports by [Alfred] Kinsey and colleagues, this is an area of women’s sexual health research that has been largely ignored over the past six decades.” — AFP/Relaxnews

P.s.. Ladies! What are waiting for? Get your jogging shoes on and hit da gym. Dont hit so hard aaa....